Since the by-election Horsdean Recreation Ground has been removed from the plan, in a great win for community.

Since being elected at the by-election Anne has brought a number of local issues to the attention of the Council on behalf of Patcham and Hollingbury residents, including the failing Allotments service and the collapse of the City's annual City in Bloom competition.  Anne is running a campaign to bring back City in Bloom in 2022.

An experienced Councillor, Anne has previously represented the Ward of Moulsecoomb & Bevendean on the City Council and served as Mayor of Brighton and Hove.

A Council plan to consolidate Royal Mail’s Brighton and Hove sorting offices into a new single facility to be built on Patcham Court Farm is courting controversy with Patcham residents, sparking a protest, petition, formation of an action group and hundreds of submissions to the City’s Planning D

The Horsdean and Vale Avenue area of Patcham currently lacks a proper playground facility for local families
Conservatives to push for £65,000 upgrade to Vale Avenue Playground to meet need at tonight’s Budget meeting.

The Vote with Mark Walker - Conservative Councillor for the Patcham Ward, Anne Meadows

Latest TV News Editor, Mark Walker, speaks to the Conservative Councillor for the Patcham Ward on Brighton and Hove City Council, Anne Meadows. There is an update on the Audit and Standards Committee, as well as a local update from Anne. 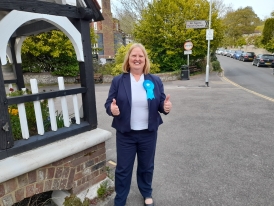