Cllr Nemeth represents Wish Ward on Brighton & Hove City Council and is known well for his work in the local community and at Hove Lagoon in particular. He won his seat from a sitting Labour Councillor in 2015 and increased his majority in May 2019. He was subsequently chosen to represent the Conservative Party as Parliamentary Candidate for Hove and Portslade.

Various community groups have been set up by Cllr Nemeth who has a keen interest in the natural environment and Hove seafront. He founded both the Friends of Hove Lagoon and Hove Beach Hut Association, and was a co-founder of the Secret Garden Group and the Blooming Boundary Campaign (which brought planters to Boundary Road).

Many know Cllr Nemeth for his work in preventing the sale of Hove Library to developers and stopping unpopular changes to the city’s secondary school catchment areas. He has also worked hard to highlight anomalies in the City Council’s rough-sleeping statistics.

Cllr Nemeth is a father of three children – one girl and two boys. He is an Electrical & Electronic Engineer by qualification and a commercial beekeeper by profession. As a journalist, he wrote over 500 columns on the history of Brighton & Hove. He is a regular at Parkrun on both Hove Promenade and at Hove Park, and takes part in most of the city’s annual running events.

Hove gets ready to level up!

The Chancellor’s Budget this week not only signalled good news for the overall economy, with a rebounding 6.5% annual growth rate, but has also delivered a major boost for the Hove seafront which is now set to receive a major financial injection from the Government.

Rather than make a series of different interjections, I would like to raise several key issues which I’ve certainly struggled with, in the run-up to, and throughout, this unfortunate process – not least in last week’s seven-hour meeting.

THE FINAL VOTE:  CONSISTENT CONSERVATIVES PREPARE TO BACK RESIDENTS AGAIN WITH ORDER TO REMOVE CYCLE LANE - BUT LABOUR WOBBLES AT ELEVENTH HOUR

Latest TV News Editor, Mark Walker, speaks to the Conservative Councillor for the Wish Ward on Brighton and Hove City Council, Robert Nemeth, about the proposal  to extend the Volks Railway line down into Brighton Marina. We also talk about local cycle lanes and the future funding of the i360.

Conservatives call for Extraordinary Meeting of Council on active travel

Our Conservative Councillors have set out what we want to achieve on behalf of residents at next Thursday’s full meeting of Brighton & Hove City Council. 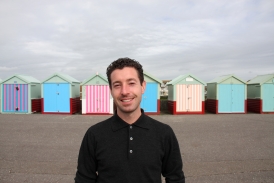