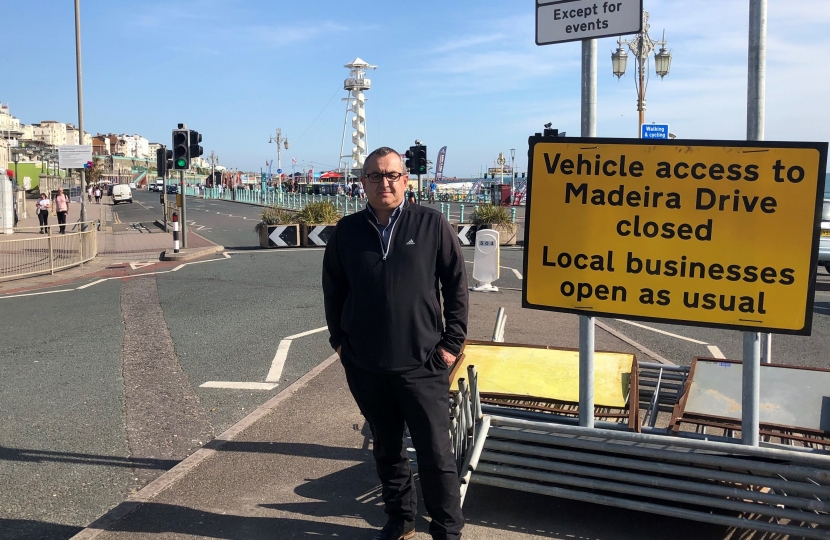 Papers released today for the Environment, Transport & Sustainability Committee show that the Green Administration are recommending the partial opening of Madeira Drive. The proposals are virtually identical to the Conservative Compromise proposal tabled at Full Council on the 13th August which the Greens emphatically voted against.

“What with Labour U-turning on the position a few weeks ago and now the Greens doing the same, we are in grave danger of common-sense prevailing.

“We are of course pleased to see this change and that Labour and Green councillors now agree with us. It is just a shame however they have taken so long and as a result, traders have suffered more than was necessary. It has also meant that Blue Badge holders have endured unacceptable marginalisation by not having access to disabled parking bays on Madeira Drive next to the pier and that they have had the indignity of asking a stranger if they could use the toilet.

“However, the proposals do not go far enough. The Greens are asking for officers to start the design process. What the council needs to do is get on with making the changes now.

“They removed the cycle lane by the pier in a matter of days of the bus companies raising concerns and altered Duke’s Mound end without coming to Committee - so they can do the same with reopening Madeira Drive.

“The proposal albeit very welcomed, seems to include unnecessary process designed with slowing any change down” Cllr Wares said.

How the Conservatives saved eight parks from Council parking charges

Maintaining public access to parks is one of the most basic requirements of councils and one that the Conservatives believe should be at the forefront of the Brighton & Hove City Council’s priorities.