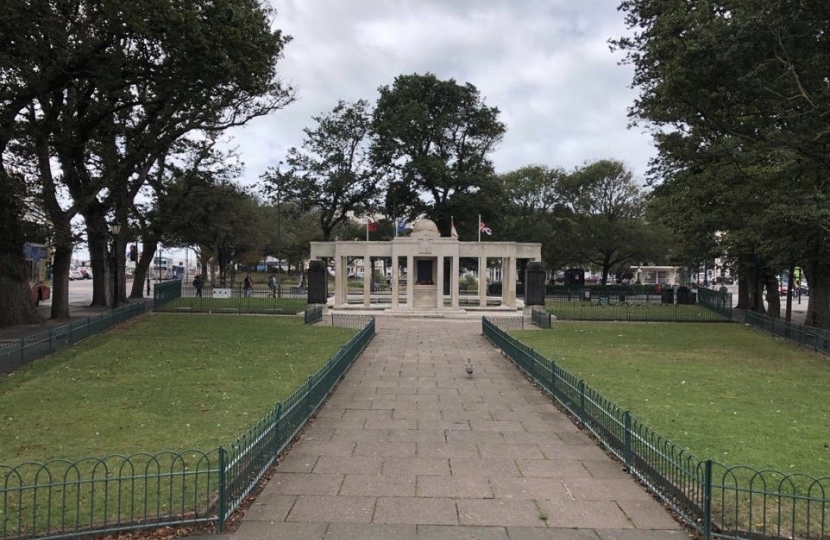 A representative of a local civic group has said that they are horrified by a Council plan to replace a number of grassed areas at the Old Steine war memorial with beds of local wild flowers.

The plans, which are part of the Valley Gardens Stage 3 project, would remove the grassed areas either side of the central path at Old Steine that are used during remembrance services for seating of participants including veterans and for the band to set up and play.

The Conservation Advisory Group, which provides advice and comments on significant planning applications affecting listed buildings, conservation areas, locally listed buildings and historic parks and gardens or their settings; put in comments to the Council about the issue through their Joint Chairman Roger Amerena.

Councillor Mary Mears said that after a week where the Council forgot the 75th Anniversary of VJ Day, this was another upsetting example of the council not properly understanding the significance of the war memorial to veterans.

“This week the council forgot VJ Day 75, leaving the war memorial in a terrible state.  One of veterans who attended was very upset and couldn’t understand how the City could leave the memorial in such a state ahead of such an important event.

“If this was not bad enough, a civic group has recently found out that the Council has plans afoot to remove several grassed areas at the Old Steine War Memorial replace them with beds of local wild flowers under the Valley Gardens Stage 3 project.

“One local group made contact this week to say how horrified they were at this proposal from the Council.

“The grassed areas which the Council plans to replace with wild flower beds are used at remembrance services both for the seating of participants and spectators including veterans and dignitaries and for the band to set up and play.  How would a remembrance service work under these new plans?

“Perhaps these schemes are being formulated by people who have never attended a remembrance service” she said.

The Civic Group, which was briefed on the plans this month by council officers, also provided comment on the proposals for new railings around the war memorial as part of Valley Gardens Stage 3.

Mr Amerena said that the design for any new railings should be in line with the historic structure of the war memorial itself and requested that when new railings are installed that the south east and south west corners of the site, which have lost their right angles to traffic management boxes and litter bins, should be reinstated.

Councillor Mears said she would be writing to the CEO and the Council Leader about the issue.